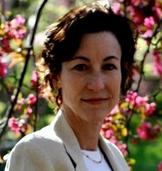 A native Floridian and Navy junior, Gardner McFall is the author of two books of poems, The Pilot's Daughter and Russian Tortoise and two children's books, Jonathan's Cloud and Naming the Animals. She is also the author of Amelia: The Libretto, for the opera Amelia, which premiered at Seattle Opera in May 2010 with music by Daron Hagen and story by Stephen Wadsworth. She is the editor of May Swenson’s prose miscellany, Made with Words, and wrote the introduction and notes for a Barnes & Nobles Classics edition of Kenneth Grahame’s The Wind in the Willows.

​McFall's poems have appeared widely, in such publications as The New Republic, The Atlantic Monthly, The New Yorker, Paris Review, Sewanee Review, Southwest Review, Tin House, and River Styx, among others. In 2008 her work was featured in Poet Lore​, with an introduction by Jane Shore. McFall is a recipient of a "Discovery"/The Nation award, The Missouri Review's Thomas McAfee Prize for Poetry as well as fellowships from Yaddo, the MacDowell Colony, and Virginia Center for the Creative Arts. She received her M.A. from the Johns Hopkins Writing Seminars, her Ph.D. from New York University, and has taught at Hunter College and the Cooper Union for the Advancement of Science and Art.  She lives and works in New York City.